A thriving horseshoe crab population is in everyone's best interest

We've blogged extensively about the Atlantic horseshoe crab's central role in infection control here, here and here. Limulus amebocyte lysate (LAL) is an aqueous extract of blood cells that is used to ensure vaccines and medical equipment are free of bacterial contamination, and the only way to produce LAL is with horseshoe crab blood.

So biomedical manufacturers and conservationists alike have a vested interest in making sure these invertebrates, whose ancestry dates back some 440 million years, continue to thrive and flourish in various habits along the Eastern seaboard.

So how is the species faring? One way to assess the health of the species is by conducting egg density studies during the horseshoe crab spawning season. The Atlantic horseshoe crab (Limulus polyphemus) is found all along the Eastern seaboard, from Florida to Maine, as well as the Gulf Coast. Most of the year, they reside underwater, but in late April through June adult horseshoe crabs seek out beaches that are partially protected from surf, within bays and coves, to spawn. Peak spawning generally occurs on evening high tides during the new and full moons.

Female horseshoe crabs generally carry around 80,000 eggs at the start of spawning season, laying them in 4-5 clusters of 4,000 eggs each during successive tides. As such, the number of eggs—and the breeding habits of the male and female horseshoe crabs—are both excellent barometers of how well the crab population is doing—and the birds and other mammals that rely on the eggs for survival. 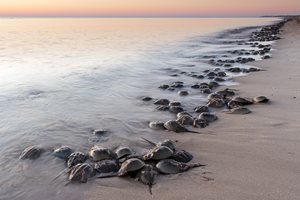 How they are doing seems to depend on where they spawn. An annual horseshoe crab trawl survey conducted by Virginia Tech finds that restriction of crab harvesting in 1999 led to an abundance of horseshoe crabs for the next five years, but in 2004 the numbers started fluctuating, with ecological shifts in near-shore ecosystem and poor recruitment of crabs getting some of the blame for the static numbers. And overfishing of horseshoe crabs for bait in the Mid-Atlantic and Northeast have been blamed for a decline in horseshoe crabs that in turn reduced the number of red knots, small migratory birds that drop in at Delaware Beach for several weeks every spring to feed on horseshoe crab eggs. The fatty content of the eggs help the birds gain weight.

In South Carolina, where horseshoe crab baiting is prohibited and conservation laws are among the toughest on the planet, the situation is brighter. Harvesting of crabs is only allowed for biomedical research, and there are quotas for that. Fishermen have to be licensed and there are laws in place to ensure the animals are handled properly. This article last year by John Dubczak, general manager of our Endotoxin and Microbial Detection division headquartered in Charleston, S.C., talks about some of the ongoing efforts, particularly in his home state, to protect the horseshoe crab population.

Various groups—government agencies, academic groups, industry—have been monitoring and managing horseshoe crabs in South Carolina for nearly 20 years. Close to 10,000 crabs have been tagged and tracked since 1997 by the US Fish and Wildlife Federation and the Atlantic States Marine Fisheries Commission, and the census shows the crab population to be very stable.

Beyond that, the South Carolina Department of Natural Resources Marine Resources Research Institute in Charleston conducted an egg density study last year sparked, in part, by the red knot findings from Delaware Bay. "Horseshoe crabs are ecologically important, their eggs are vitally important to migratory and shore birds," says Assistant Marine Scientist Amy Fowler. "We were interested in enumerating egg densities on our beaches to see how the numbers compared to other beaches that birds use as stopovers."

The 2.5-square mile community of Harbor Island near Beaufort and Mitchelville Beach Park on Hilton Head Island, popular nesting sites for horseshoe crabs, served as home base for the egg density survey. Data were collected last year between late May and the middle of June, during a full-moon tide or new-moon tide, when the crabs are most likely to venture onto beaches to spawn. With these findings, scientists extrapolated that South Carolina's crab egg population had a range of up to 9.8 million per cubic meter—well within the range of other egg density surveys conducted along other sections of the Atlantic Coast. "That is good for us," says Fowler. "It shows there are a lot of eggs available." 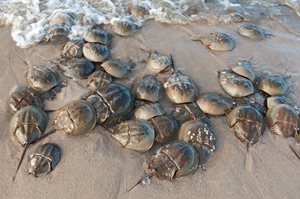 The team also found remarkable spatial differences between the two habitats. On Harbor Island, for instance, the eggs were concentrated on one side of the beach, suggesting that the rockier landscape was funnelling the crabs to one specific spot to spawn. In contrast, Mitchelville Beach Park had eggs throughout suggesting just the opposite—that the crabs were able to climb onto the beach anywhere and that there was more available space to spawn. These observations are important, says Fowler, in understanding some of the barriers that can make it harder for horseshoe crabs to get onto beaches. "A lot of the NJ and MA beaches have anthropogenic barriers that make it hard for them to get up on the beach, meaning there is less available space to spawn" says Fowler.

The huge spatial differences between different nesting sites also makes it difficult to draw any conclusions from the SC egg density survey, so scientists have taken the data to the next level and begun genotyping selected subsamples to try and determine how large the crab population is in term of its genetic diversity. That study is still ongoing, but early data suggest no evidence of inbreeding that might indicate the species is declining, says Fowler's colleague, Assistant Marine Scientist John Robinson, who is leading the genetic study. The group hopes to expand the study and survey even more beaches where crabs nest.

Other research directions could include analyzing available shoreline habits for horseshoe crab spawning and juvenile nurseries, examining the health and behavior of horseshoe crabs after their blood has been collected and evaluating mechanisms to increase post-bleeding survival rates of crabs.

If you are interested in learning more about Charles River's commitment to conservation of the Atlantic horseshoe crab and other related resources, please visit us at www.criver.com/hsc.

Photos of Horseshoe Crabs on the beach, © Ariane Müller. 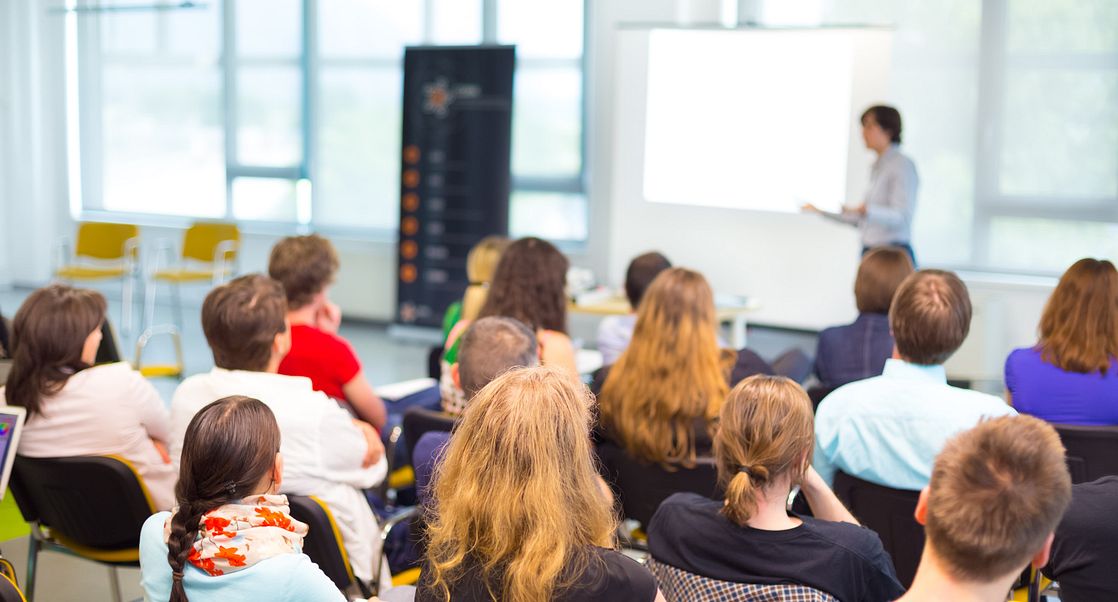 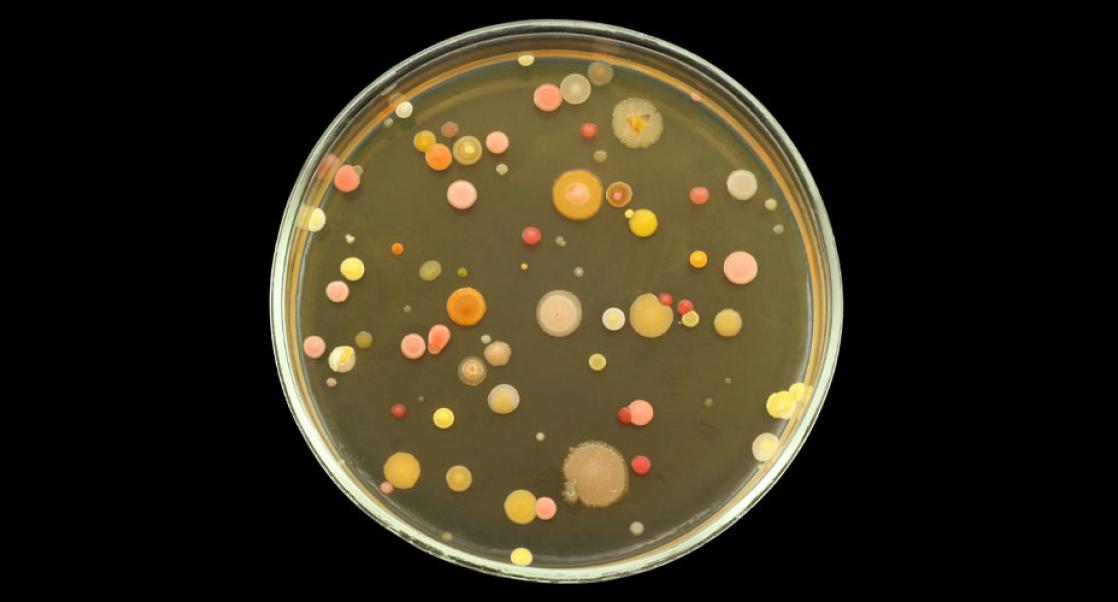 A Drain on the System: Problems in the Clean Room