Understanding Immune Mechanisms: The Key to Vaccine Efficacy and Safety 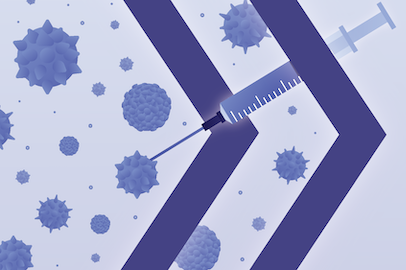 How do humoral and cell-mediated responses affect your vaccine candidate’s efficacy and protection capacity? When developing a vaccine, it is critical to understand the role that immune cells play in mounting the body’s defense, and how these mechanisms can alter your therapy’s function. But what endpoints should you consider? Which assays should you run?

Join our experts for a half-day of insight into successful, translational vaccine development. Learn strategies for overcoming the unique challenges of your therapy and understand the key evaluations that comprise a robust assessment of efficacy and safety.

Vaccines are not small molecules or biologics and their activity on the immune response is key. How might our recent experience with COVID blur the lines? At our toxicology roundtable, you’ll have the opportunity to ask questions as we cover topics like:

*Spots are limited, so check the box to sign up for this session to continue the conversation focusing on vaccine development. If you are selected, you will receive a Snack Magic voucher for refreshments to enjoy during this session.

Sarah Gould is a senior principle scientific advisor with extensive experience (20 + years) in biotech, pharma and as a consultant. She has a proven track record of delivering toxicology and safety pharmacology programs, individual studies and regulatory documents (IND, IMPD, CTD) for both small and large molecules (proteins, peptides, mAbs, virus vectors) along the development pipeline and has supported over 100 submissions. Sarah has interacted with various health authorities, including FDA, EMA, PMDA, as well as individual European authorities and emerging markets.

Dr. Claire Richards is currently the manager of Charles River’s infectious disease services, specializing in bacterial and viral infection models, including in vitro, in vivo, and ex vivo analysis.

She completed her PhD studying monoclonal antibodies against influenza viruses at Babraham Institute Cambridge. Her work includes research on herpesviruses at Cambridge University and the University of Bristol, and modulating immune responses to viral infection.

Jeffrey Almond is a Visiting Professor at both the Sir William Dunn School of Pathology, University of Oxford and at the Department of Microbiology, University of Reading. He is also an Oxford Martin Fellow with the Oxford Martin Programme on Vaccines. Previously (1999-2014) he was Vice President and Head of Research and External R&D at Sanofi Pasteur, the vaccine division of the Sanofi group based in Lyon France. There he was responsible for establishing and managing a portfolio of vaccine projects and for arranging R&D partnerships with Academia and Biotech companies relevant to the commercial interests of Sanofi Pasteur. Prior to joining Sanofi, Jeffrey Almond spent most of his career in the UK. He was lecturer at the University of Leicester from 1979-85 and Professor of Microbiology and Head of the School of Animal and Microbial Sciences at the University of Reading 1985-99. He has served on numerous national and international committees including being a member of Council of the MRC and has held senior officer positions in several learned societies including the International Union of Microbiological Societies and the UK Academy of Medical Sciences. Professor Almond is a Director and/or scientific advisor to several Biotech companies in Europe, the UK and the USA and a scientific advisor to the NIBSC and acts as Chair of the Scientific Advisory Board of the Pirbright Institute in the UK. He has published over 170 papers in the fields of virology and vaccinology.

Russell is the Principal Scientist of Bioanalytical Services at Charles River Portishead and an Analytical Project Manager for their clinical services. He is a member of the British Society of Immunology and has 20 years of experience working with immunological assays. Russell was awarded his PhD in 2000 and joined KWS BioTest in 2007. KWS BioTest was acquired by Charles River in 2018.

Alan Stokes, PhD, DABT is a board-certified toxicologist and is currently the Head of Preclinical Toxicology for the US-based Research and Development Center (RDC) for GlaxoSmithKline (GSK) Vaccines. In this role, Dr. Stokes provides nonclinical toxicology support to multiple vaccine discovery and development projects being conducted by the US RDC. This support includes the design, conduct, and reporting of non-GLP and GLP regulated toxicology studies as well as writing and reviewing regulatory submission documents (e.g., regulatory meeting briefing documents, INDs, IBs). After completing his postdoctoral fellowship, Dr. Stokes was a senior scientist for the Schering Plough Research Institute where he started his career as an industrial toxicologist. He later joined GSK as a senior toxicologist in the pharmaceutical division, eventually leading the general toxicology team for GSK Pharma in Research Triangle Park, NC, USA. After a brief period serving as Director of Toxicology and Interim Vice President at Southern Research Institute in Birmingham, Alabama, he re-joined GSK in the Vaccines division in his current role. In his career, he has managed 140+ toxicology studies ranging in duration from single dose to multi-year carcinogenicity studies.

Cynthia Rohde received her PhD in biochemistry from the University of Wisconsin at Madison and gradually made her way into toxicology. She became a Diplomate of the American Board of Toxicology in 2011. She is currently an Associate Research Fellow in the Drug Safety Research and Development (DSRD) at Pfizer. She has worked in the pharmaceutical industry for over 13 years in nonclinical safety. In her current role, Cynthia helps project teams in the areas of oncology and vaccines to develop and implement nonclinical safety strategies throughout a molecule’s lifecycle. She has been working on vaccines for approximately 8 years.

Dr. Caba Downs is a board certified toxicologist with over 16 years of experience in early and late stage nonclinical drug development of small and large molecules as well as therapeutic mRNAs. Dr. Caba Downs received her PhD in pharmacology/toxicology at the School of Pharmacy at University of Connecticut. Following her postdoctoral training at University of Connecticut and later at Pfizer, she joined Vertex where she worked on small molecules as a regulatory toxicologist. In 2016, Dr. Caba Downs joined Shire, later Takeda, where she supported the nonclinical development of TAKHZYRO/lanadelumab through worldwide registrations as lead toxicologist (FDA approved Aug 2018). In her current role, she de-risks and develops nonclinical safety strategies for therapeutic mRNA vaccines.

Dr. Neske is a toxicologist with over 4 years of experience in early and late-stage nonclinical drug development of therapeutic mRNA vaccines. Dr. Neske received her PhD in theoretical medicine at the Center for Pharmaceutical Research, Development and Safety (ZAFES) at University of Frankfurt (Main), Germany. As a senior manager of Toxicology and Operations at CureVac, she designs and conducts nonclinical studies to determine toxicity profiles of various therapeutic mRNA vaccines. Dr. Neske will be supporting the nonclinical development of CVnCoV (CureVac’s COVID-19 vaccine) through European registrations as lead toxicologist.

Dr. Segal is a senior toxicologist with over 35 years of experience gained in various functions in academia, public authorities as well as in the pharmaceutical and chemical industry. As an independent toxicology consultant, he provides scientific support to the pharmaceutical, chemical, and consumer products industries. He was a toxicologist with Health Canada from 1980 until 2000, after which he then moved to industry, where he served as senior toxicologist and regulatory specialist at Huntsman Europe and then with GE Advanced Materials in Belgium. In 2006, he joined GSK Vaccines as Director of Nonclinical Toxicology and Pharmacology. From 2015, he served as senior toxicology consultant for Penman Consulting BVBA and then independently from 2017 onwards.