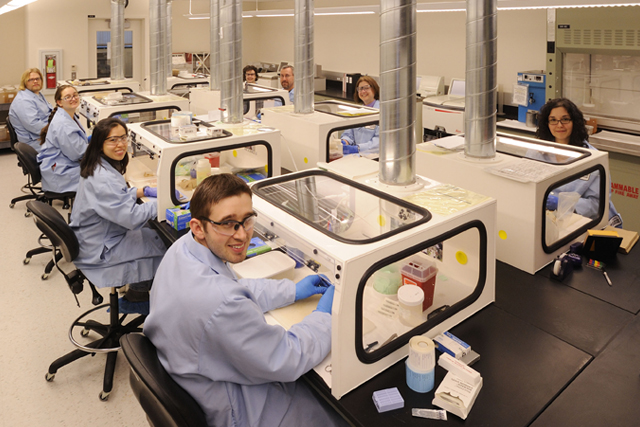 You may not realize it from looking at the outside of the building, but inside the 450,000-square-foot facility at 334 South St., the employees at Charles River Labs are working on life-saving treatments. There, the company works with pharmaceutical and biotech companies in the early stages of drug development.

Although Charles River doesn’t disclose which drugs it has helped develop, it is one of the largest early-stage contract research organizations existing today, according to Michael Broadhurst, senior site director for Charles River Massachusetts-Shrewsbury.

“Last year in 2017, around 80 percent of all drugs approved by the FDA were worked on by Charles River,” Broadhurst said.

Named after the Charles River in Boston and founded in 1947, the company has headquarters in Wilmington with worldwide offices. The Shrewsbury facility is one of only four in Massachusetts and focuses on Safety Assessment and Discovery divisions in the pre-drug stages. In the Safety Assessment facility, more than 120 investigational new drug (IND) programs are conducted every year, while the discovery division has delivered more than 320 patents and 75-plus preclinical drug candidates to sponsors during the past 17 years.

One of the reasons the company chose to have a facility in Shrewsbury is because of its proximity to the Massachusetts headquarters. That has benefits for the town, as well. Charles River employs roughly 200 employees in Shrewsbury, according to Broadhurst.

“Most employees live within the Shrewsbury or greater Worcester area, myself included,” he said.

Added Town Manager Kevin J. Mizikar, “That’s a business that I think most towns want to have.”

Broadhurst noted the company is on a rapid growth track for hiring higher-level job positions over the next several years, with plans to more than double the number of employees locally.

“We’ll continue to recruit in this area,” he said.