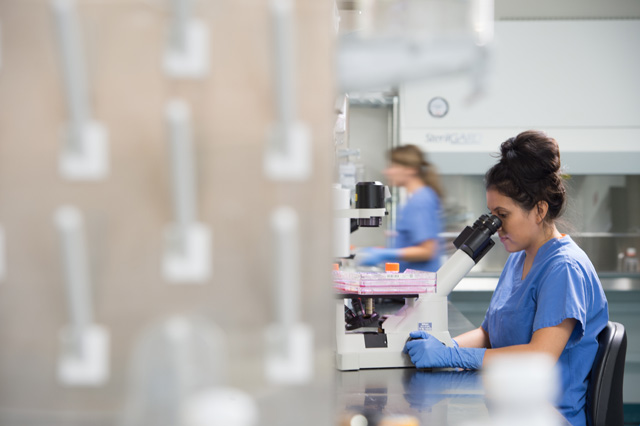 The phenotypic-based screening approach to drug discovery is an efficient strategy to identify promising small molecule hits by looking at the effect, or phenotype, that they induce in disease-relevant cells or tissues. One major challenge for progressing hits from phenotypic screens to mature lead compounds is the identification of the protein target or targets that are responsible for the phenotypic effect. Therefore, molecular target identification, also known as target deconvolution, is an essential part of the process for understanding compound mechanism of action and further optimizing compounds of interest. “Traditional approaches to target deconvolution, such as affinity binding chromatography, are largely decoupled from biological conditions under which screening hits exert phenotypic activity and lack the precision required to differentiate between off-target binding and proteins the compound is targeting selectively,” notes John Montana, Charles River’s Corporate Vice President of Integrated Drug Discovery and Strategic Projects. “Another drawback of these techniques is the workflow involved in preparing an affinity binding chromatography assay – because the compound required to interact with the biological material is bound to agarose. Therefore, the utility to identify cell surface and intracellular proteins, such as G-protein coupled receptors, kinases and epigenetic targets, is severely compromised.”

New advances in combining linker and capture technologies with in-depth knowledge of how these are attached to phenotypic molecules of interest, combined with powerful LC-MS techniques such as the Capture Compound Mass Spectrometry (CCMS) technology, enables scientists to overcome these obstacles and better identify target proteins that are responsible for the phenotypic response. CCMS technology uses trifunctional molecules, combining reversible affinity binding and cross-link-induced covalent binding, to selectively bind, capture, isolate and identify compound targets. This, at unprecedented sensitivity, allows for the isolation and identification even of low abundant specific binders of drug candidates under the conditions of the relevant phenotypic assays, thus correlating specific binders with biological activity and target engagement. Uniquely, CCMS permits the specific capture of proteins from any target class from living cells. CCMS can also be used to identify off-target activity (unwanted binding) of lead molecules and avoid potential toxicity due to such interactions.

As a result of Charles River’s continued commitment to emerging drug discovery technologies, we now offer this proprietary protein capture technology for phenotypic screening target deconvolution. “The CCMS technology is complementary to our strong track record in phenotypic screening.” John Montana adds, “And Charles River is driven to helping pharmaceutical and biotech companies accelerate the development of better, safer products, and I’m confident this technology enables us to advance that mission.”