Recent Use of Galleria mellonella as Model System 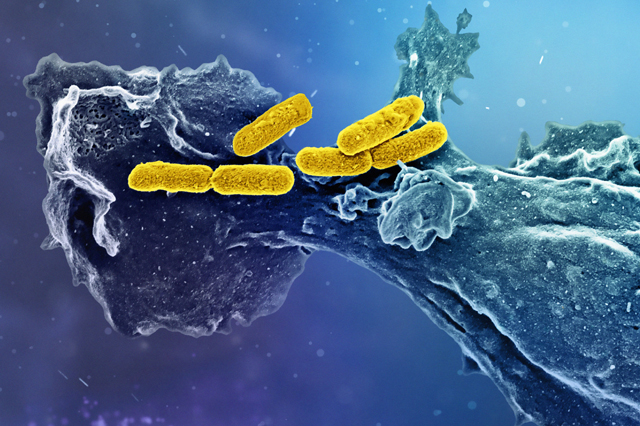 The continuing spread of antimicrobial resistance and current lack of novel drugs to combat known bacterial infections has driven the development of novel assays to improve compound efficacy testing. The use of Galleria mellonella larvae as preclinical in vivo model system to study host-pathogen interactions, virulence, toxicity and the efficacy of novel compounds is gaining momentum and interest in both the academic and pharmaceutical research space. Charles River Global Discovery Services (Portishead) now offers the G. mellonella model system as a preclinical in vivo model for virulence testing, efficacy, toxicity testing of novel compounds (both as monotherapy treatments and combination therapy), and PK/PD analysis.

Perhaps one of the most common applications for use of G. mellonella, in addition to virulence testing, is efficacy testing of novel antimicrobial agents, such as use of novel drug combinations1, peptides2 and phages3. A recent large-scale study, profiling almost 3,000 dose-resolved drug combinations or antibiotics, human targeted drugs and food additives (such as vanillin) was assessed against 3 ESKAPE pathogens, E. coli, Pseudomonas aeruginosa and Salmonella enterica Serovar Typhimurium1. This study highlighted that antagonistic interactions that occur between drugs targeting different cellular processes are far more prevalent when compared to those exhibiting synergistic interactions, seen when the drugs target the same pathway5. Some antagonistic interactions were shown to affect both growth inhibition and drug efflux, with the second drug causing a decrease in the proton-motive force-driven uptake of the antimicrobial, or increase in drug efflux driven by a change in efflux pump activity. Interestingly, the study also highlighted that drug-drug interactions are more highly conserved within bacterial species, with the interactions largely being species-specific, indicating a potential for synergistic drug interactions to provide narrow spectrum activity1. This study used, along with in vitro and bioinformatic screens, G. mellonella as a model system to study strong and conserved synergistic activity of drug combinations against multi-drug resistant E. coli and K. pneumoniae. This study showed colistin-clarithromycin and spectinomycin-vanillin to display synergistic activities against E. coli and K. pneumoniae infected G. mellonella, with the drug combinations showing an increase in larval survival over a 72-hour infection, when compared to the administration of each drug alone1. This recent Nature Letter5 has shown the utility in using G. mellonella to study synergism and novel combination therapy, and has highlighted the potential use of food additives in combination therapies, with vanillin shown to increase the intracellular concentration of spectinomycin1.

Use of G. mellonella as a model to study chemical toxicity is becoming more prevalent. Research by Allegra et al. (2018) provided evidence that G. mellonella larvae provide more robust LD50 assessment of acute chemical toxicity, showing the larvae to provide a reliable predictor for low toxicity of chemicals4. G. mellonella has also been successfully used to screen for toxicity of novel antitubercular activity of manganese complexes, which showed low or minimal levels of toxicity with 100% survival seen when using doses around 10 mg/kg5. By performing MIC studies and toxicity assays in G. mellonella, this study has highlighting the potential for metal complexes to be as a novel therapeutic agent against TB5. Use of both larvae and the standard cell culture-based toxicity assays will likely provide a much more robust assessment of the toxicity of novel chemicals.

Determination of differences in virulence levels between strains of pathogenic bacteria, including those exhibiting antimicrobial resistance, is an important step in understanding the epidemiology of a disease. The value and cost effectiveness of G. mellonella as a model system for virulence studies has recently been highlighted in a molecular epidemiology and virulence studies on colistin-resistant Klebsiella species6, 7. Different colistin-resistant K. pneumoniae blood isolates from patients were shown to display variable virulence profiles6. In addition to highlight significant virulence differences, use of G. mellonella showed colistin MIC to be a significant predictor of LD50 and LD90 of the studied isolates, with a higher MIC values having higher lethal dose values6. The increase in virulence level in colistin-resistant isolates has also been noted in the recently identified hypervirulent Klebsiella variicola isolate, which exhibited an enhancement of virulence in G. mellonella7.

With the recent development of research-grade larvae that are bred free of hormones and antibiotics (used by Charles River Laboratories, Portishead), and the cost-effectiveness of their use, G. mellonella is the perfect model system for preclinical testing prior to any further studies in a mammalian model system. Combined with its potential to reduce the burden of use of mammalian model systems, as part of the 3Rs, and recent articles showing its value as an in vivo model to study novel combination therapy, identify hypervirulent isolates and test compound toxicity shows G. mellonella to be an ideal preclinical model system for drug discovery projects. If you are interested in using G. mellonella as part of your drug discovery project, see how Charles River Laboratories can help.