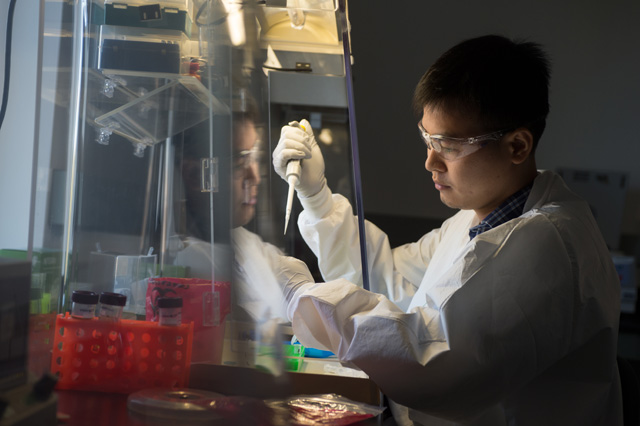 Charles River is pleased to offer new reporter bioassays for the testing of ustekinumab and palivizumab. These bioassays provide more reliable, reproducible, and precise surrogate approaches.

Ustekinumab (human αIL12/IL23 p40 mAb) was developed for the treatment of moderate-to-severe psoriasis and works by binding to the p40 subunit of the IL-12 and IL-23 cytokines and blocking them from binding to the receptor protein expressed on the surface of T cells or natural killer cells. The receptors signal through different pathways: the IL12R via STAT4 pathway and the IL23R via STAT3 pathway.

Reflecting the mechanism of action (MoA) of therapeutic antibodies that interfere with the T-cell immune response is challenging. The use of primary cells in the assay causes variability often leading to a lack of reproducibility, and the co-stimulatory signal required in vivo needs to be mimicked in vitro to receive a full response. For ustekinumab, the situation is even more challenging, since the major group of T cells responsible for the psoriasis plaques are TH17 skin cells, which are virtually inaccessible for in vitro use.

For testing of ustekinumab samples, Charles River has developed a bioassay where primary T cells as effector cells are replaced by an engineered reporter cell line expressing the IL23 receptor and SIE luc. SIE is the sis-inducible element, a transcription factor binding site for STAT3 homo-dimer. This reporter approach reflects the mechanism of action of ustekinumab in a simple, homogenous, sensitive and reproducible way that is suitable for use in GMP environments for bioactivity determination, biosimilarity assessment and stability studies.

The Fc (crystallizable fragment) region of therapeutic antibodies can have an important role in their safety and efficacy. Palivizumab is a humanized monoclonal IgG1 antibody directed against an epitope in the A antigenic site of the F protein of respiratory syncytial virus (RSV), and is used for the prevention of RSV infection in children. Even though the Fc effector function potential was assessed to be low for palivizumab, there is a requirement to evaluate these capabilities, especially with regards to glyco-optimized follow-on biologics with potentially altered Fc effector function potential.

MoA testing of palivizumab is based on a human lung carcinoma cell line with epithelial-like morphology. The cells are infected with RSV A Long, a prototype strain for subtype A. The infected cells are then used as target cells in reporter surrogate approaches to assess the antibody-dependent cellular cytotoxicity (ADCC) and antibody-dependent cellular phagocytosis (ADCP) capabilities of palivizumab. The reporter assays are reliable, reproducible and precise, which is reflected by the rising use and acceptance of surrogate approaches instead of the tedious, time-consuming and sometimes highly variable primary MoA assays.