SLST and MLST with AccuGENX-ST®

AccuGENX-ST® is a microbial characterization process used to distinguish members of the same species to the strain level by utilizing the well-established, highly accurate sequencing methods of SLST and MLST (single and multilocus sequence typing).

We perform DNA sequencing of targets outside of the standard regions sequenced for microbial identification (16S, D2, or ITS2) to provide you with data to prove differences and/or similarities at the strain level. Determination to the strain level using SLST and MLST allows you to definitively track the source of contamination or simply verify your known production strains.

Is Your Organism of Interest
on the AccuGENX-ST® Validated Method List?

From Acholeplasma laidlawii to Yarrowia lipolytica, each species investigated by our Accugenix® R&D team is validated and listed. New species may be developed and validated on request.

Given the increased reproducibility of SLST and MLST sequence-based strain typing, they can help determine if your probiotic strains are the same or if the isolates recovered from one area are the same or different as another isolate—an important trait that allows for high resolution and greater confidence in your tracking and trending projects over time compared to methods utilizing fragment-based analysis.

In order to achieve a higher degree of resolution, each species is researched by our R&D team to determine the gene targets outside of the region used for identification that will most definitively resolve them at the subspecies or strain level. The number and identity of these loci vary for each species, due to the level of relatedness and rate of evolution within each group. 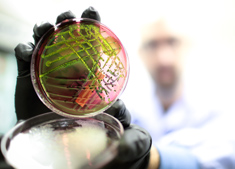 Read about how AccuGENX-ST® was used to facilitate a contamination investigation at a dietary supplement and beverage manufacturing company.

If a sterility failure occurs, customers can send samples to us, and we can assist in determining the root cause. We will first identify the isolates by 16S rDNA sequencing. If the 16S sequence is different, you can be sure that the isolates are different strains. Further characterization is necessary for those isolates that have identical 16S sequences and can be done using SLST or MLST (single and multilocus sequence typing). This strain typing technology is designed to deliver the most informative data and have the ability to obtain an unambiguous result from all strains within a species.

Our SLST and MLST sequence-based strain typing can help you map your microbial environment. We can create a library database of sequences from the microorganisms found in your manufacturing environment. When a contaminant is encountered, you can quickly pinpoint where you have seen that particular strain before. This greatly reduces the time and cost associated with identifying the source of contamination.

How to Interpret an AccuGENX-ST® Strain Typing Report

This guide details how to interpret S/MLST results generated by AccuGENX-ST®.

ePoster: How Accurate and Robust is Your Fungal Characterization Strategy?