What should we make of all this crosstalk between bones and other organ systems? The second of a four-part series.

When one thinks of the human skeleton, one might imagine death or one of those static, predictable characters on "The Walking Dead". In truth, the musculoskeletal system is a surprisingly versatile performer, so multi-faceted in fact that it's becoming hard to keep up with the potential connections and links that bones appear to have with organ systems and pathways, and how they might be influencing everything from our reproductive health to how we fight disease.

The skeleton protects us from injury, maintains our reservoir of calcium and remakes itself about once a decade to reinforce its structure and to stay functional. These roles are well understood and well-studied. But data that began emerging about 10 years ago—much of it highlighted during a number of compelling talks at this year's SOT2015, suggest the skeleton is much more eclectic player, and its suspected synergies between different organ systems and pathways —the cardiovascular, reproductive, central nervous and immune systems to name a few—are beginning to raise questions on how bones should be viewed in the larger context of preclinical drug development.

One of the most dynamic connections appears to be with the stockpile of weapons we use to fight disease, and the trillions of microbes that inhabit our gut and appears to have an outsized influence on how we function and thrive.

Bone cells and immune cells share some common ancestry. Pluripotent hematopoetic stem cells that reside in the bone marrow and differentiate into multipotent progenitors are the precursors of osteoclasts, a bone cell that resorbs bone tissue and is critical in remodeling, and macrophages, an innate immune cell that engulfs and digest cellular debris.

How these two systems interact is not completely understood, however. 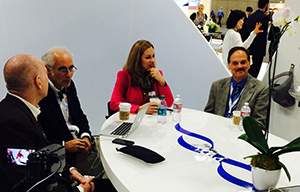 The classical way that bones regulate immune function is through the protein (RANKL) secreted by the bone-forming cells known as osteoblasts. RANKL is expressed by CD4+ T cells, so-called "helper" cells because they help facilitate and orchestrate other immune responses to viral infections. But in the bone marrow niches—local tissue environments that maintain and regulate stem cells—are other cells, including macrophages that could also potentially regulate skeletal function, noted Clifford J. Rosen, Director of Clinical and Translational Research and a Senior Scientist at Maine Medical Center's Research Institute during a SOT2015 roundtable discussion moderated by CRL Principal Scientist Rana Samadfam.

Macrophages, which contribute to inflammation, are a particularly interesting player. They have long been considered the garbage collectors because of their voracious appetites; they gobble up pathogens in the bloodstream, diseased tissue from flesh and bones and dust in the lungs (just like those Walking Dead zombies). In actuality, these cells, which look like fried eggs, have a much more diverse profile, noted Cornell University immunotoxicology professor Rodney Dietert who has studied the innate cells extensively.  "We now know that a lot of things start and stop with these mobile cells," says Dietert. "They can remodel, destroy or promote cancer cells, or they can help homeostasis in organs or destroy those tissues depending on the signals."

Renegade macrophages that go rogue and morph into a pro-inflammatory subtype have already been associated with potential chronic inflammation, obesity and type 2 diabetes. How these subpopulations behave—by suppressing certain T cells (Th1 and Th2) and promoting others (Th17)--could also be a recipe for promoting osteoclast function and hence destruction of bone, says Dietert. "The Th1 and Th2 have cytokines that help regulate a bit better," he says. "If you block that, you get things out of balance."

Balance, indeed. Complicating this picture further is the role of the microbiome, an ecosystem of over 1,000 intestinal microbiota that is figuring increasingly in the discussion of how we study and treat disease. In skeletal health, an altered microbiome triggered by bad diet, disease or the other factors is increasingly associated with disease that, on the surface, appear to have little to do with gastro-intestinal health. An altered immune system, for instance, is thought to lead to altered bone function by weakening the immune system, which in turn leads to metabolic dysfunction and chronic inflammation.

Dietert noted that our microbiota co-matures with our immune system, enabling the immune system to better recognize actual environmental threats to the organism. Upset the gut environment and the process falters. Moreover, the window of opportunity to bring a disordered gut back into balance is limited and far more complicated to fix than a sudden change in eating habits.

As the role of bones evolves, there is a rush to understand their intertwined relationships with different biological systems. There are now suggestions that skeletal evaluations be included in routine toxicology studies as a multi-disciplinary approach to drug testing. Interest in the microbiome has triggered a burst of new studies, and in the realm of tightly-monitored research models come questions about whether animal diagnostic laboratories should be characterizing the microbiome rather than screening for specific pathogens, and whether even diets can impact the bone density of genetically identical research animals.

In a way, these reciprocal relationships between the immune system and bones are a bit like superpowers that keep one another in check. In a perfect world they communicate perfectly, when things go wrong it gets ugly, but most of the time it's probably a draw.

Shining a Light on Efficacy and Safety

Hot Trends in the World of Pathology